It was during the summer, not long ago. I downloaded GameMaker: Studio, and was catching on pretty quickly. I did one tutorial, then realized that the only way for me to really learn was by doing. So I threw together a quick little game about a dude named Fil running around in his seizure-inducing bedroom. And as thus, Fil's House was born!

After my friend laughed at the demo whilst questioning my sanity, the game began to evolve over the summer from something weird to something really weird. 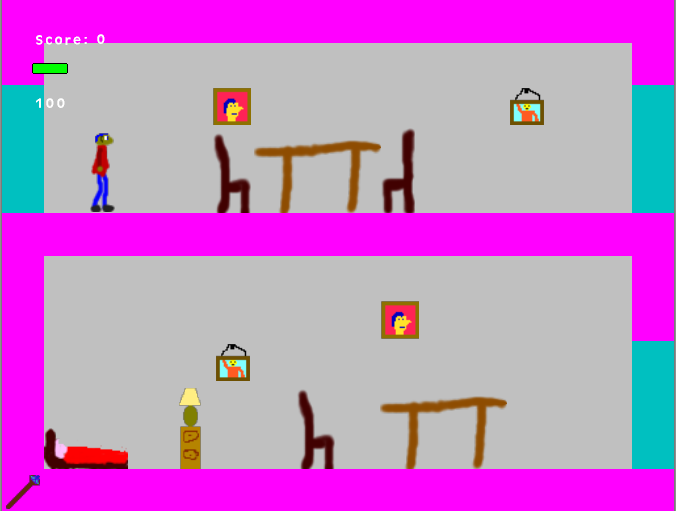 The game is an utter assault on the senses. The music is so sudden, chills go down my spine whenever I hear anything like it. The sprites are awful. The speech is TTS. The UI is in Comic Sans. The animations could cause seizures at one point. The boss is slightly overpowered. To get to the boss, you have to do a bunch of grinding, then survive a room full of missiles. The jump momentum is all messed up. There is no real tutorial. I could go on with the game's flaws, but I don't think I can. Needless to say, this game is bad. It became an in-joke with my friends, where we all wanted to see how far I would take this.

The game is bad beyond repair, but it's not a total loss. It's thanks to this game that I got an idea of what it's like to manage the public side of the game. Every week, I would Email my friends with the latest version of Fil's house, and would provide a changelog. I set up a Dropbox folder, which I encouraged my friends to use in order to report bugs in the form of .txt files. I really got a safe, condensed experience of what it was like to be in control of the social side of a project. In the end, this experience will likely pay off in the future.

If you have the guts, do past-Turnovus a huge favor, and download Fil's House with the link below:

FIL me in on the action!

Update: I reminded one of my friends about Fil's House. This is how he replied: