There was a time where I carried around a large notebook full of graph paper with me at all times. It was during this time that I developed a surprisingly fun hobby: creating sprites for the Commadore 64, then converting the binary sprite into decimal values tht could be poked into the memory to return a sprite (it's a lot easier than it sounds). One day, while figuring out a C64 emulator, I decided to make a simple program with a little man pacing around, which meant I had to design a little man to pace around. The result was Quest Guy. 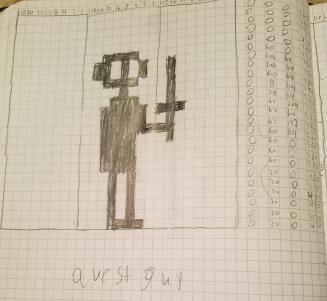 I then poked the sprite into the emulator and got this:

I was pretty satisfied, and this was the most complex program I have made for the C64 to-date, but I always felt as though there was more for Quest Guy. This was during the time when I was learning GameMaker: Studio (see 11-8-17). A common concept in all Quest Guy games was one thing: "You're in a dungeon. Find all of the artifacts to win." My first atempt at a Quest Guy video game was a side-scrolling platformer. I never finished the first level because I was trying to use the in-built physics engine, but I never got the controls to work right. He would always launch to the right no matter which direction key you hit, then fall off the level. The file for that game has been lost, but the ear-bleed music was recovered.

My second attempt was to be a top-down dungeon scroller with the same objective, again made in GameMaker:Studio. I got the controls done, and horrible collisions. It was in this version that I decided to start Quest guy off without his awkwardly-held sword, but have him don it later. He also got a walk cycle in this version. It turned out like this:

I then gave up on poor Quest Guy for about a year. Then I joined the Weekly Game Jam, where you are given a prompt and have to make a game with that prompt in a week (this part of the story is very recent). I decided to use BlitzBASIC to revive the Quest Guy top-down idea with a few major changes: Quest Guy would be without his sword, and the objects he collected would increase his memory stat, which would affect the world around him (the prompt for the week was "remember"). The game proved to be more of a commitment than a week's work, so I went with Taco Salad instead. But I must say, my work turned out somewhat okay-looking. Here's the result:

Poor, poor quest guy. Maybe some day he'll get his own game. If I ever make it, though, it will probably be built off of the latter edition.