Above, you will likely see the profile pic of my greatest creation, TurnBot. Months of programming, caffeine, and sleep loss have gone into the many (currently two) branches of TurnBot. TurnBot functions on both Discord and Twitter. Feel free to check both branches out.

In case you were wondering, he was written in Python 3.x. The libraries used include (but are not limited to) BeautifulSoup, PIL, discord.py, tweepy, autocomplete, and a few others.

Commands given to TurnBot are preceded by 't^'

t^poem is a somewhat-simple bit of code that scrapes the poem of the day from Poetry Soup and sends it to you. That's about it.

t^credits is your run-of-the-mill economy system. Using t^signup will give you a credit account, sending messages in public servers gets you credits, and using t^credits displays the number of credits in your account. Using t^exchange n @mention allows you to send n credits to the mentioned user, if you have enough in your account. To make this system work, TurnBot keeps a list of user IDs and the balance of their respective accounts. When a user sends a message and a certain number is chosen at random, TurnBot seeks out the user's ID and adds one credit to the respective account. When a user exchanges credits, TurnBot seeks out the accounts of the sender and receiver, determines if the sender has enough credits and if both accounts exist, then adjusts the balance of the accounts properly. Every now and then, TurnBot writes the IDs and balances to a text file, which he reads on start-up to ensure credits aren't lost due to updates, blackouts, etc.

t^console is a vital feature of TurnBot. It allows the admins of the current server to toggle whether or not certain commands are available in that server. For example, if an admin says "t^console 1", TurnBot will toggle whether or not he accepts commands regarding credits on that server. Simply using t^console shows the status of each option. This function works much like credits, except with server IDs instead of user IDs, and strings of numbers representing bolean options instead of credit balances. It uses a similar save system.

The weirdest feature, inspired by YouTube channel "Ashens", is t^chef. Typing in t^chef [string] will cause TurnBot to yield the following: 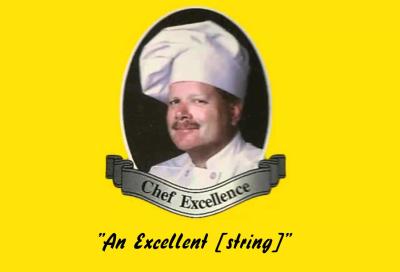 The last feature I'll be discussing is t^slowclap, based loosely off of a quote from Portal 2. Just look at the GIF below to see what it does:

This bit isn't finished yet, come back later.